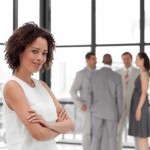 Most companies are interested in advancing women into positions of leadership.  They have seen the evidence that shows businesses benefit when women reach the top:  more women leaders means better recruiting, management, problem solving, innovation, performance, and shareholder value.

Many have started women’s initiatives designed to advance women. Yet most of the companies are not seeing the results they hoped for, and some are still getting sued. What are they getting wrong?

Sometimes, it is just a matter of waiting too long to get started. Twitter, for example, started a significant initiative to reduce gender bias in its workplace, but not soon enough to prevent a lawsuit alleging that the company fails to promote female employees.

Sometimes, the companies focus on the wrong things. They provide programs designed to “fix” women by making them better negotiators or more vocal in meetings, but entirely ignore the significant obstacles to women’s leadership in their company policies, practices, and cultures that need fixing.

And sometimes, the companies simply are not committed enough. They lack leadership from the top and the involvement of key players, they have not involved men, they have not communicated the business case for change to all levels of the organization, or they have chosen to pursue quick, superficial fixes.

What would an effective women’s initiative include?  At a minimum, the following:

1.  A candid assessment of the company’s current position, including at a minimum:

2.  Education for the entire company about unconscious gender bias, including not only ongoing group trainings but informal education in meetings, conversations, and coaching sessions.

3.  Alignment of company business objectives and the advancement of women, focusing on:

4.  Actions to remove institutional barriers to women’s advancement, such as

5.  Thoughtful implementation to embed the goals and actions in the company’s culture, including eliminating nonverbal communication that undermines the initiative, consistently communicating support from the top, creating an inclusive environment, and celebrating successes.

6.  A system to measure and monitor the success of the actions, and to retool as necessary.

Advancing women to leadership isn’t easy or quick, but companies that want to succeed are doing it now.

If this article was helpful, get more when you subscribe to our updates.